To register for any of these programs - visit: www.nyacklibrary.org/eventscalendar.html 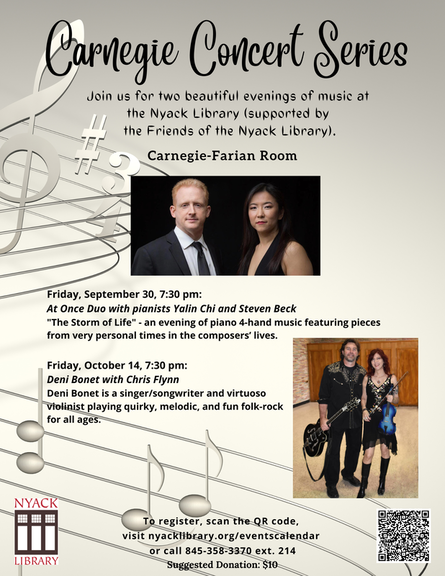 YALIN CHI
Originally from Beijing, China, Yalin Chi made her début with the Central Opera Orchestra before moving to the United States to study at Interlochen Arts Academy. Yalin has performed at venues including Alice Tully Hall, Weill Recital Hall at Carnegie Hall, Kumho Art Hall in Seoul, Korea, and ZhongShan Music Hall in Beijing China. Her solo recital was selected by the Poughkeepsie Journal as one of the weekend top picks, and Leslie Gerber of the Woodstock Times described her recital in the Saugerties Pro Musica concert series as “flowing and masterful,” with “gorgeous tonal coloring.”
Yalin has worked with musicians around the world, including principal trombonist of the New York Philharmonic Joseph Alessi, principal trumpet of the London Symphony Orchestra Philip Cobb, clarinetist Alexander Fiterstein, and concertmaster of the Seoul Symphony Orchestra Wayne Lin. As an orchestral musician, she regularly performs with Albany Symphony, New Jersey Festival Orchestra, and has held the principal keyboard position at the Hudson Valley Philharmonic since 2014.
Yalin studied with Seymour Lipkin and Jerome Lowenthal at the Juilliard School where she earned both undergraduate and masters of music degrees, and continued studies with Peter Frankl at Yale School of Music before joining the West Point Band in 2008.

STEVEN BECK
In the 2019–20 season pianist Steven Beck performs Saint-Saëns’s Carnival of the Animals with the New York Philharmonic, and Beethoven’s Triple Concerto with the Princeton Symphony Orchestra. He also reprised his annual Christmas Eve performance of J.S. Bach’s Goldberg Variations at Bargemusic, the Brooklyn-based venue that has become a New York institution.
Mr. Beck is an experienced performer of new music. He has worked with composers including Carter, Boulez, Dutilleux, Charles Wuorinen, George Crumb, Perle, and Fred Lerdahl, and performed with ensembles such as Speculum Musicae and the New York New Music Ensemble. Mr. Beck is a member of The Knights, Talea Ensemble, and Da Capo Chamber Players. He is also a member of Quattro Mani, a piano duo specializing in contemporary music. He has appeared as an orchestral keyboard player with the New York Philharmonic, New York City Ballet Orchestra, Orpheus Chamber Orchestra, Mariinsky Orchestra, and many others.
Steven Beck’s discography includes Lieberson’s Piano Concerto No. 3 (for Bridge Records) and Carter’s Double Concerto (Albany Records). He is a Steinway Artist.

​
​It's no secret that Deni Bonet can play a violin like nobody's business. Or that she writes memorable songs that make you want to listen again and again. For years, Deni has been honing her craft as a violinist, singer, songwriter and performer. Her style ranges from pop to roots-rock to new folk. Although classically trained, Deni quit the classical world because she hated having to wear black and sit still! She has a stellar resume, having performed and recorded with Cyndi Lauper, R.E.M., Sarah McLachlan and many others. Her previous appearances include four sold-out concerts at Carnegie Hall, NPR’s Mountain Stage, The Great Wall of China, the United Nations, and the White House for President Obama. For the past several years, Deni has been touring in the US and Europe headlining festivals, performing arts centers, clubs, colleges, and concert halls soloing with symphonies. Her music has been featured on HBO, NBC, American Airlines, and several films. She was recently honored to be awarded a grant through the Arts Envoy Program of the US Government to spend a month on a residency in Africa teaching violin, songwriting, and rock ’n roll at a music college in Zanzibar. Deni Bonet has released several CDs of her own original music, including last year’s critically-acclaimed "Bright Shiny Objects” on Zip Records/Sony-RED. She is currently putting the finishing touches on a new new album that will be released in early 2022.

Chris Flynn is a guitarist and singer who has accompanied Rock and Roll Hall of Famers Ronnie Spector and Dennis Dunaway (Alice Cooper) along with Simon Kirke (Free, Bad Company), Chris Collingwood (Fountains of Wayne), Garland Jeffreys, Willie Nile, and many others. He has performed at Carnegie Hall and Lincoln Center and served for many years as the musical director of the All Star Irish Rock Revue in New York City featuring Irish luminaries such as Cait O’Riordan (The Pogues), Joanie Madden (Cherish The Ladies), and raconteurs Alphie and Malachy McCourt. He has been performing and touring with Deni Bonet for the past four years.

"Engaging, multi-talented violinist Deni Bonet. Unlike most violinists, she is not nailed to the floor. And she doesn’t shy away from going head-to-head with the guitar player, having fun and breaking an erstwhile-stodgy image of the grand old instrument.” ~ Forbes Magazine 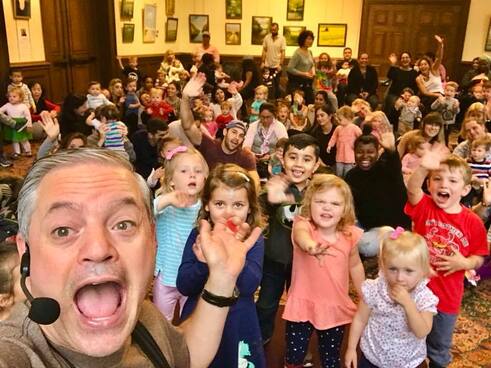 ​
Graham Peter Clarke  is an American musician, songwriter, arranger, and entertainer. Active since 1995 and performing frequently in the New York metropolitan area, Clarke is regarded as one of New York's most popular and long-lasting children's entertainers and recording artists having played well over 5,000 musical performances on the east coast for both children and adults.


Please join us for this fun and festive Holiday concert/Sing A Long for children ages 4 and up and their families!  Let's get in the holiday spirit together as we laugh and sing-along with Graham! 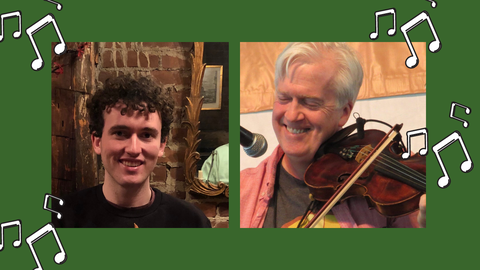 
​
Hailing from Pearl River, New York, Kieran comes from a long line of well-known Irish musicians, namely his mother Rose Conway Flanagan and uncle Brian Conway. Having grown up in the house of an Irish music teacher, Kieran’s environment cultivated a deep appreciation and love for the music. And he’s no exception to this trend; his sisters are members of the all-female Irish music band Girsa. Since the age of ten, he has been a protege of the esteemed Irish pianist Brendan Dolan, as well as student to renowned flute player Margie Mulvihill. Since 2012, Kieran has won many Irish music competitions in the New York area and medaled in multiple All Ireland Fleadh Cheoil competitions. He even went on to win 1st Place on the piano at the All Ireland Fleadh in 2016. He is currently studying as an undergraduate Civil Engineering major at Manhattan College. Brian Conway is one of the premier Irish fiddle players living in America. He performs with a skill, grace and force that are steeped in tradition but distinctively his own. Brian has won numerous All-Ireland fiddling competitions, including the prestigious All-Ireland senior championship. New York born, Brian is a leading exponent of the highly ornamented Sligo fiddling style made famous by the late Michael Coleman and passed on to him by legendary Martin Wynne and fiddle great Andy McGann. His talents have also been enthusiastically received all over North America and throughout Ireland and the rest of Europe. 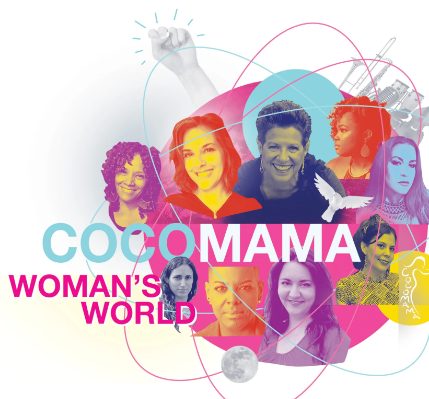 A virtual United Nations of women, members of Cocomama hail from around the globe gathering their influences from far and wide. Salsa, soul, R&B, Afro-Cuban and Latin jazz are among the items on the menu whenever they hit the stage creating a sound that is all at once fierce and beautiful!
Cocomama has enchanted audiences at the United Nations, Central Park, the Brooklyn Academy of Music, the Metropolitan Museum of Art, the New York City Marathon, Joe's Pub, Studio 54, the Cape May Jazz Festival, the Montclair Jazz Festival, the Northhampton Jazz Festival,  the New Jersey Performing Arts Center, the Spoleto Music Festival, the Michigan's Women’s Festival and have served as musical ambassadors for the US State Department in Latin America.
Cocomama’s origins date back to 2005 when an all-female salsa band was requested to play a fundraiser at the Copacabana for New York Mayor Michael Bloomberg. The success of this chance performance led to other engagements and from these early gigs, Cocomama was born. The group focused primarily on Afro-Cuban dance music for several years, recording their first EP with renowned producer (and Marc Anthony keyboardist) Ricky Gonzalez in 2012.  Since then, the ensemble has evolved, incorporating influences from classical music, jazz, Latin American traditions and beyond. “Quiero” (released on Truth Revolution Records and included in the 2016 Grammy pre-nominations for Best Tropical Latin Album) celebrated the coming together of a wide range of musical experiences in three different languages. Today, the ensemble continues to be a "musical laboratory" drawing upon each member's creative voice through collaborative composing and arranging.
“Woman’s World”, their new self-produced album released in 2021, reflects this collaboration and diversity of musical influences. The project celebrates the group’s influences from Afro-Cuban, Classical, Jazz, Afro-Caribbean, Latin American, Soul music and beyond. The music on both albums strives to uplift and empower as evidenced by the lyrics of the title track of Quiero which states, “Follow your heart; find your passion, open your mind for destiny is in your hands”. 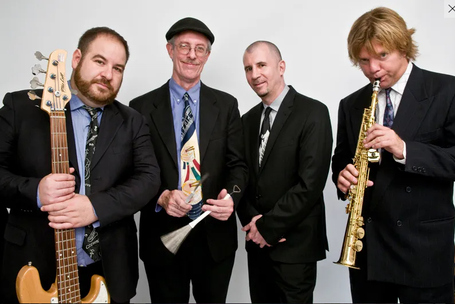 
The Blue Heaven swing sextet is a small band with the big band sound. It was featured as the swing band for the television soap opera, "Guiding Light," which was broadcast worldwide. Wherever they perform, Blue Heaven is enthusiastically received by listening audiences and swing dancers alike. This band has two recent releases on Soul Kid Jazz Records. You can hear them in full here: Eternal Swing and here: Deep Art. You can also find performance videos here: Art Lillard & Blue Heaven. Recent performance locations include Unison Arts in New Paltz, Puffin Cultural Forum in Teaneck, NJ, and Swing 46 Jazz & Supper Club in New York City, Spoke the Hub (Garden of Union) in Brooklyn, and the Clinton Hill branch of the Brooklyn Public Library. 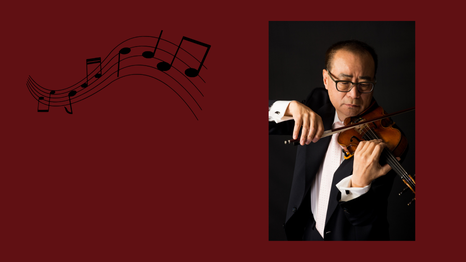 ​Yong Tae Kim has been a member of the Seoul National Symphony in Korea and the Calgary Symphony and the Edmonton Symphony in Canada, and he was the concertmaster and soloist with the Inland Empire Symphony in California. He has played with the New Jersey Symphony Orchestra, and he was the principal second violin and soloist with the Wayne Chamber Orchestra and a member of the Lake George Opera Festival Orchestra. He has also been a member of the orchestra for many Broadway shows, including The Secret Garden and The Lion King. Mr. Kim has performed in solo recitals and chamber concerts in Europe, South America and in his native country, South Korea. He is a frequent performer in the New York area and has been on the faculty of the Mount Royal College School of Music in Calgary, Canada, the Claremont Music School in California, and the Thurnauer School of Music in New Jersey. Mr. Kim is the founding member of the Zanoli String Trio in residence at the New Jersey City University and he has been on the violin and chamber music faculty of NJCU since 2006. Mr. Kim received his bachelor of music degree from Seoul National University and continued with graduate studies at Indiana University where he studied with Yuval Yaron. 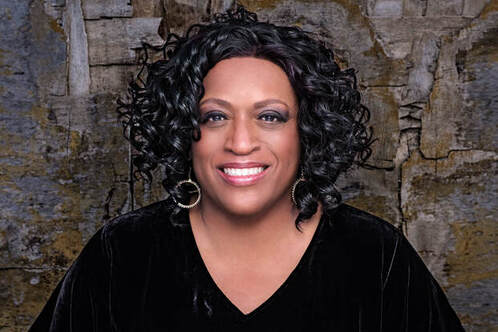 Native New Yorker and 2019 New York Bistro Award winner, Shirley Crabbe has been hailed as possessing a voice that “must surely appeal to all who love good jazz singing.” Her “almost Ella Fitzgerald–like vibe glows…” says Downbeat Magazine's John Ephland on her 2011 debut recording HOME featuring the legendary saxophonist Houston Person. Her 2018 Top 50 album BRIDGES (2018) has received rave reviews and spotlights her collaborations with renowned pianists Donald Vega, and David Budway. Shirley has been a guest on  syndicated radio programs such as “Jazz Inspired” hosted by Judy Carmichael, and Steve Cuden's "StoryBeat" to name a few, and currently performs at jazz clubs, festivals and concert series in the US.   She is the recipient of the 2009 Rockland County Executive Performing Artist Award, 2008 Stanton Bronze Medalist at the  American Traditions Vocal Competition.  In 2010, she was a top 5 finalist at Jazzmobile’s “Best of the Best” Jazz Vocalist Competition held in New York City.   Shirley holds music degrees from Manhattan School of Music and Northwestern University.