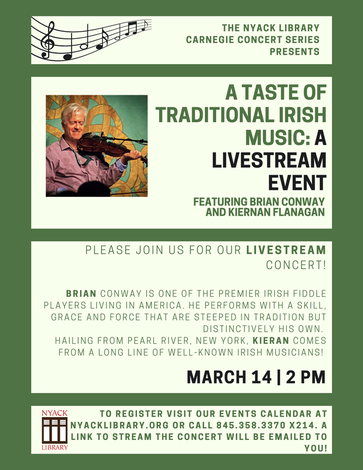 Celtic Music with Brian Conway and Kieran Flanagan
Sunday, March 14, 2021, 2:00 PM
​View Event: https://www.nyacklibrary.org/conway.html​
​
​Hailing from Pearl River, New York, Kieran comes from a long line of well-known Irish musicians, namely his mother Rose Conway Flanagan and uncle Brian Conway. Having grown up in the house of an Irish music teacher, Kieran’s environment cultivated a deep appreciation and love for the music. And he’s no exception to this trend; his sisters are members of the all-female Irish music band Girsa. Since the age of ten, he has been a protege of the esteemed Irish pianist Brendan Dolan, as well as student to renowned flute player Margie Mulvihill. Since 2012, Kieran has won many Irish music competitions in the New York area and medaled in multiple All Ireland Fleadh Cheoil competitions. He even went on to win 1st Place on the piano at the All Ireland Fleadh in 2016. He is currently studying as an undergraduate Civil Engineering major at Manhattan College. Brian Conway is one of the premier Irish fiddle players living in America. He performs with a skill, grace and force that are steeped in tradition but distinctively his own. Brian has won numerous All-Ireland fiddling competitions, including the prestigious All-Ireland senior championship. New York born, Brian is a leading exponent of the highly ornamented Sligo fiddling style made famous by the late Michael Coleman and passed on to him by legendary Martin Wynne and fiddle great Andy McGann. His talents have also been enthusiastically received all over North America and throughout Ireland and the rest of Europe. 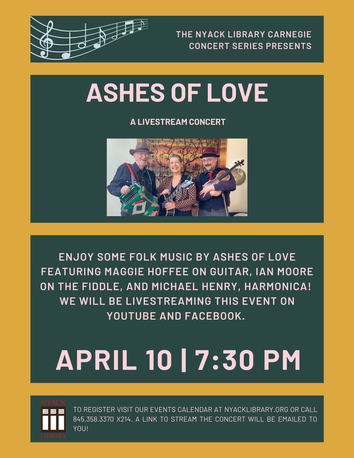 The band consists of Maggie Hoffee, Guitar; Ian Moore, Fiddle; and Michel Henry, Harmonica with all members singing Vocals. All come from a rich variety of musical experiences that each one brings to this unique mix. 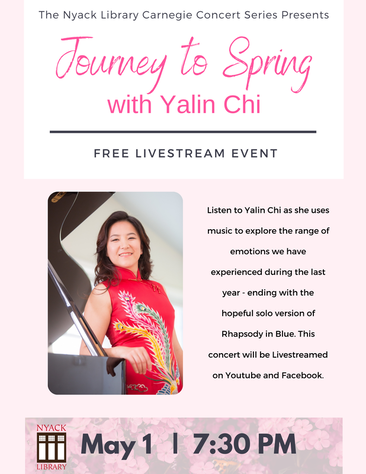 Yalin Chi - Journey to the Spring
Saturday, May 1, 2021, 7:30 PM
View Event: ​www.nyacklibrary.org/spring.html
​
Originally from Beijing, China, Yalin Chi made her début with the Central Opera Orchestra before moving to the United States to study at Interlochen Arts Academy. Yalin has performed at venues including Alice Tully Hall, Weill Recital Hall at Carnegie Hall, Kumho Art Hall in Seoul, Korea, and ZhongShan Music Hall in Beijing China. Her solo recital last year was selected by the Poughkeepsie Journal as one of the weekend top picks, and Leslie Gerber of the Woodstock Times described her recent recital in the Saugerties Pro Musica concert series as “flowing and masterful,” with “gorgeous tonal coloring.”
Yalin has worked with musicians around the world, including principal trombonist of the New York Philharmonic Joseph Alessi, principal trumpet of the London Symphony Orchestra Philip Cobb, clarinetist Alexander Fiterstein, and concertmaster of the Seoul Symphony Orchestra Wayne Lin. As an orchestral musician, she regularly performs with Albany Symphony, New Jersey Festival Orchestra, and has held the principal keyboard position at the Hudson Valley Philharmonic since 2014.
Yalin studied with Seymour Lipkin and Jerome Lowenthal at the Juilliard School where she earned both undergraduate and masters of music degrees, and continued studies with Peter Frankl at Yale School of Music before joining the West Point Band in 2008. 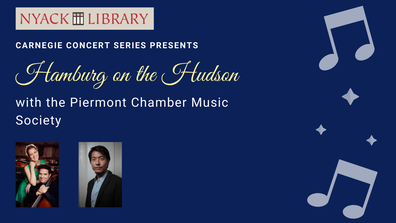 Join Pianist, Andrew Pak, Violinist, Annaliesa Place and Cellist, Diego Garcia, for the first Carnegie Concert of the 2021-22 season. We look forward to welcoming the Piermont Chamber Music Society back to the Carnegie-Farian Room for a performance of Sonatazensatz: Scherzo in C minor for Violin and Piano, Cello Sonata No. 1 in E minor, Op. 38 and Piano Trio No. 1 in D minor, Op 49 by nineteenth century German composers, Johannes Brahms and Felix Mendelssohn.

​ A $10 donation is requested at the door to support The Friends of the Nyack Library who make this series possible. 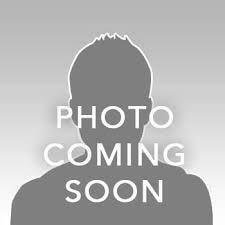 Cuentos: Tales from the Latino World - A Family Event with David Gonzalez!
Saturday, December 11, 2021, 2 PM
For kids in grades K and up with their caregivers.

Cuentos paints a vivid picture of the people and rich cultures of the Spanish-speaking world with colorful tales from the Caribbean, South America, and the Bronx. Spanish language words are sprinkled throughout the stories and songs in such a way that young audiences can repeat and retain their sound and meaning. These tales are filled with memorable characters, fantastic plots and positive messages for children. Space is limited for this very popular event! Please register each person who will be attending- both children and adults. Priority will be given to Nyack residents. 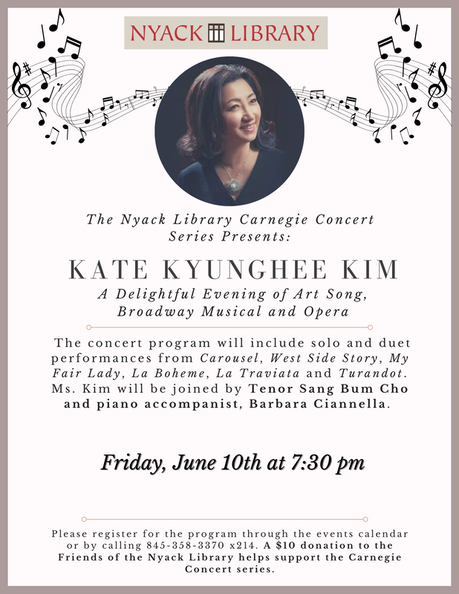 We thank you for your understanding & cooperation.
Nyack Library is pleased to present Soprano Kate Kyunghee Kim for a delightful evening of
Art Song, Broadway Musical and Opera. The concert program includes solo and duet performances from Carousel, West Side Story, My Fair Lady, La Boheme, La Traviata and Turandot. Ms. Kim will be joined by Tenor Sang Bum Cho and piano accompanist, Barbara Ciannella. Please register for the program through the events calendar or by calling 845-358-3370 x214.
A $10 donation to the Friends of the Nyack Library helps support the Carnegie Concert series.