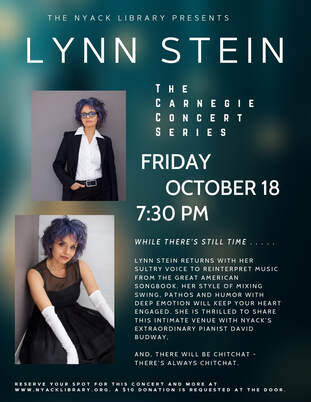 Lynn Stein returns with her sultry voice to reinterpret music from The Great American Songbook. Her style of mixing swing, pathos and humor with deep emotion will keep your heart engaged. She is thrilled to share this intimate venue with Nyack’s extraordinary pianist David Budway,

And, there will be chitchat - there’s always chitchat. 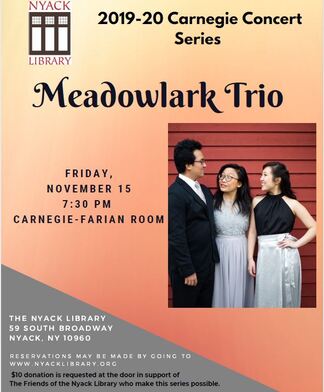 ​The Meadowlark Piano Trio hails from America’s heartland. Formed by three best friends in 2012, the trio has since performed nationwide to great acclaim, and they were named semi-finalists in the 2017 Fischoff International Chamber Music Competition. Festival appearances include: Toronto Summer Music Festival, Garth Newel Music Center, St. Lawrence String Quartet Seminar, Avaloch Music Residency, and Caroga Lake Music Festival, where they were the first ensemble-in-residence. The trio has performed in diverse concert venues, ranging from the Carnegie Room Concerts and Spectrum Music Series in New York, to Bing Concert Hall in California, to house concerts in Montana. The trio’s members received advanced degrees from the Shepherd School at Rice University, and the Cleveland Institute of Music. Their mentors have been musicians from the Chiara Quartet, Cavani Quartet, Bayla Keyes, and Daniel Shapiro.
The Meadowlark Trio looks beyond the conventional model of classical music in a recital hall. In addition to repertoire from the canon, the trio participates actively in the creation of new music and has commissioned multiple works by living composers such as Nels Drue Daily, Stephanie Boyd, and Thomas Dougherty. The trio is also deeply committed to community outreach. and it performs regularly in schools, nursing homes, community centers, and hospitals. For the 2018-19 season, the Meadowlark Trio members are fellows for Music for Food (musicforfood.net), and they will present concerts and workshops throughout the greater Boston area, to benefit local food pantries.
​In their free time, the trio mates enjoy obsessively playing board games, attempting to ski, and making pizza from scratch. 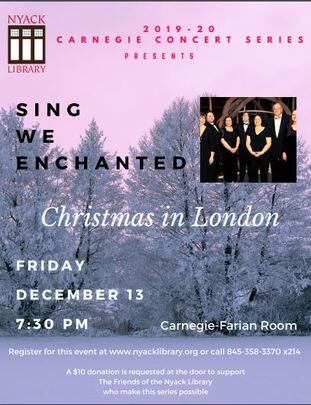 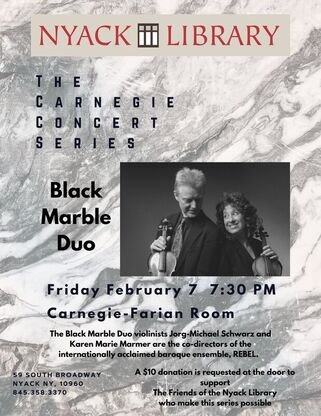 ​The violinists of Black Marble are the co-directors of the internationally acclaimed baroque ensemble, REBEL, with whom they record and concertize extensively in the U.S. and abroad. The name ‘Black Marble’ derives from the English translation of their last names: Schwarz (German, for black) and Marmer (Dutch, for marble). The duo has performed at the Metropolitan Museum of Art, Kendal-on-Hudson Concert Series, and Midtown Concerts in New York City; in September 2010 Black Marble was featured on WQXR-FM’s ‘violin month’, in an interview and video performance hosted by Jeff Spurgeon.


The ensemble aims to explore the rich, virtuosic and rarely performed repertoire written for two violins by Leclair, Telemann, Reger, Spohr and Bartok, amongst others, on instruments and bows appropriate to their respective periods. The husband and wife team perform on equally well-matched Stainer violins dated 1660 and 1668, respectively. 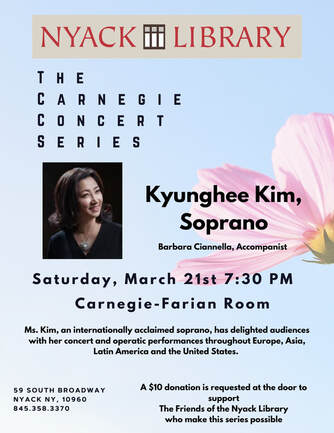 ​Soprano KYUNGHEE KIM has delighted audiences with her concert and operatic performances throughout Europe, Asia, Latin America and the United States.  Engagements this season include:  include: a solo recital at the Opera America National Opera Center in New York; soloist in Mozart’s Exultate, jubilate with Bergen Symphony Orchestra; Saint-Saëns’ Oratorio de Noël with Central Park West Presbyterian Church in New York; World Premiere Contemporary Music at Symphony Space in New York; appearances with Voce con Trio in New Jersey and Pennsylvania.  Other recent appearances:  soloist with Concierto Sinfonia de Gala in Lima, Peru; additional concerts in Mexico and New York; soloist in Bach’s Mass in B Minor with St. George Episcopal in Newburgh, NY.  Ms. Kim made her professional recital debut in her native Seoul, Korea, followed by a European debut in Vienna with the Richard Wagner Opera Society.  She has appeared many times in China, where one of her performances was the first professional Western recital ever presented in the Hunan province.

In recent seasons, Ms. Kim has been a soloist with Music from Above Foundation, teaching master classes and performing in orchestral and televised performances, such as Concierto con Orchestra Sinfonica Juvenile de Yucatan in Merida, Mexico; Anfiteatro Eva Peron del Parque Centenario in Argentina; Universidad Mariano Galvez in Guatemala and in Paraguay, as well as concerts in Turkey and Kazakhstan.
Known for her elegant interpretations, her opera roles, primarily performed with Teatro Carlo Felice, Lyric Opera of New Jersey and Bronx Opera, include Violetta in La Traviata, Mimi in La Bohème, the title role in Madama Butterfly, Liu in Turandot, Magda in La Rondine, Micäela in Carmen and Pamina in Die Zauberflöte.  As an oratorio/symphonic soloist, audiences have also enjoyed her performances of Beethoven’s Ninth Symphony, Haydn’s The Creation, Mendelssohn’s Elijah and Handel’s Messiah at esteemed venues, including Avery Fisher Hall (at Lincoln Center) and Carnegie Hall.
As a frequent soloist with Westchester Symphonic Winds in New York, Ms. Kim most recently performed in a program entitled Ayre & Space, as well as singing in Washington, DC’s One Month Festival, a program featuring performing artists in 27 countries over a one month period.
Ms. Kim received her Bachelor’s degree from Seoul National University and her Master’s degree in Voice from the Manhattan School of Music.
https://www.vocalartistsmgmt.com/kyunghee-kim 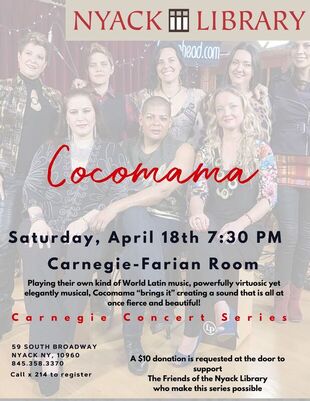 “If you crave music that is uninterruptedly arresting as well as music that is profoundly moving then you would do well to gravitate towards Cocomama…I cannot think of anyone or any group that could make such explosive music, so seductively – song after song, after song.”
Raul Da Gama, LatinJazzNet.com
Their debut album Quiero, which was included in the 2016 Grammy pre-nominations for Best Tropical Latin album, celebrates the coming together of a wide range of musical experiences in three different languages. As evidenced by their diverse repertoire, the group’s influences are limitless: Afro-Cuban, Classical, Jazz, Afro-Caribbean, Latin American, Soul, R&B and beyond. As well as showcasing the band members' songwriting and musical strengths, the music on Quiero strives to uplift and encourage as evidenced by the lyrics of the title track whose message is: “Follow your heart; find your passion, open your mind for destiny is in your hands”. “This album is special,” says Musical Director/Pianist Nicki Denner, “because it could only have been made by these particular musicians. Each member has their own artistic vision and talent which allows us to have a completely original sound.”
Cocomama’s origins date back to 2005 when an all-female salsa band was requested to play a fundraiser at the Copacabana for then New York Mayor Michael Bloomberg. The success of this chance performance led to other engagements and from these early gigs, Cocomama was born. For several years, the group was primarily a Latin dance band recording their first EP with renowned producer Ricky Gonzalez which featured hard-hitting, original Latin dance music. Over time, however, the sheer diversity of the band members' backgrounds and talents could not be ignored. Today, the group’s sound is a more inclusive blending of musical styles and influences from around the globe.
Enchanting audiences with their irresistible groove at New York City’s most popular jazz and Latin clubs including Studio 54, the Iridium, Joe’s Pub, Club Bonafide, Fat Cat and Subrosa, Cocomama has also performed at the United Nations, the Brooklyn Academy of Music, Central Park, the Metropolitan Museum of Art, the New York City Marathon, the Cape May Jazz Festival, the New Jersey Performing Arts Center, the Spoleto Music Festival and the Michigan Womyn’s Festival. 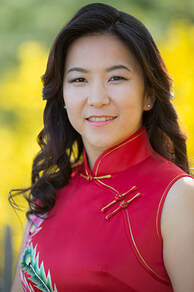 Originally from Beijing, China, Yalin Chi made her début with the Central Opera Orchestra before moving to the United States to study at Interlochen Arts Academy. Yalin has performed at venues including Alice Tully Hall, Weill Recital Hall at Carnegie Hall, Kumho Art Hall in Seoul, Korea, and ZhongShan Music Hall in Beijing China. Her solo recital last year was selected by the Poughkeepsie Journal as one of the weekend top picks, and Leslie Gerber of the Woodstock Times described her recent recital in the Saugerties Pro Musica concert series as “flowing and masterful,” with “gorgeous tonal coloring.”
Yalin has worked with musicians around the world, including principal trombonist of the New York Philharmonic Joseph Alessi, principal trumpet of the London Symphony Orchestra Philip Cobb, clarinetist Alexander Fiterstein, and concertmaster of the Seoul Symphony Orchestra Wayne Lin. As an orchestral musician, she regularly performs with Albany Symphony, New Jersey Festival Orchestra, and has held the principal keyboard position at the Hudson Valley Philharmonic since 2014.
Yalin studied with Seymour Lipkin and Jerome Lowenthal at the Juilliard School where she earned both undergraduate and masters of music degrees, and continued studies with Peter Frankl at Yale School of Music before joining the West Point Band in 2008.